Springboks emerge battered and bruised from 46-6 victory over Samoa

World Cup Rugby fever has gripped the nation with some incredible highs and lows over the past 10 days.

The 2015 Rugby World Cup is the eighth Rugby World Cup, the quadrennial rugby union world championship.The tournament is hosted by England from 18 September to 31 October. Twickenham Stadium in London will host the final.

England was chosen to host the competition in July 2009, beating rival bids from Italy, Japan and South Africa. The competition’s organisers, Rugby World Cup Limited, had recommended England to the International Rugby Board (IRB; now known as World Rugby).

Of the 20 teams competing at the 2015 World Cup, 12 of them qualified by finishing in the top three places in their pools in the 2011 World Cup. The other eight teams qualified through regional competition. Of the 20 countries competing in the World Cup in 2011, there was only one change – Uruguay replaced Russia. This is the first World Cup since 1987 with no new teams. 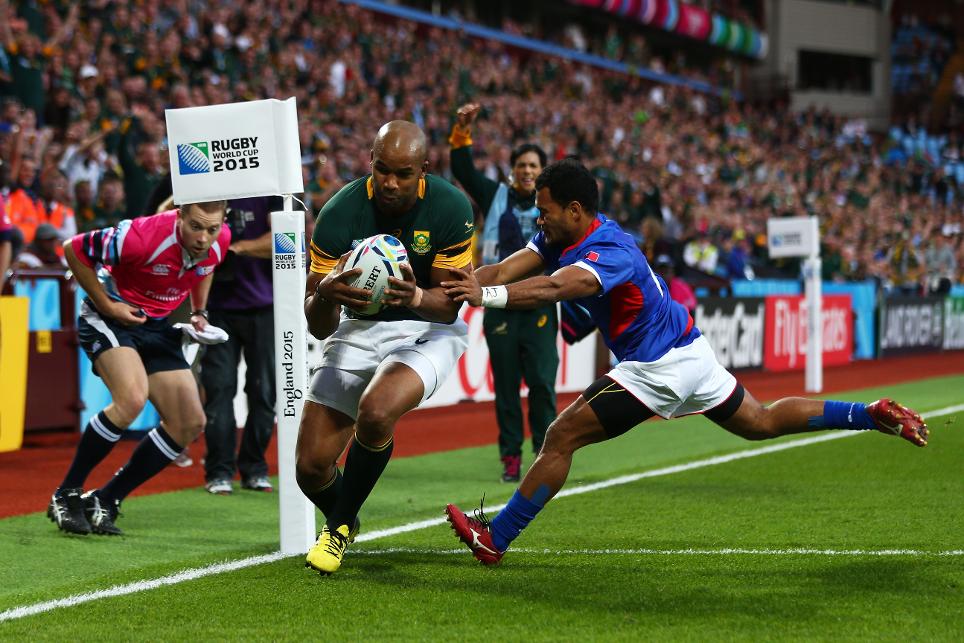 BIRMINGHAM, 26 Sept – South Africa’s 46-6 Pool B victory against Samoa helped heal the emotional wounds of their defeat by Japan but left the Springboks with battered and bruised bodies.

“How long is the press conference?” coach Heyneke Meyer joked when asked to offer an update on the walking wounded, which included the impressive Eben Etzebeth and captain Jean de Villiers, who almost missed the tournament with a fractured jaw.

“I’m not sure because a lot of guys have gone for X-rays,” he added.

“Jean is one of them. There are five or six other players with injuries. It’s his other jaw. We just hope and pray that he’s right. There’s a long list.”

It looked like being another long and difficult afternoon for the Springboks when Mike Stanley sent over two penalties to give Samoa an early 6-3 lead.

But the Samoa fly-half handed South Africa the initiative in the 15th minute when his misjudged pass was picked off by JP Pietersen (pictured above), who raced away to score the first of his three tries.

Habana’s try took his World Cup total to 11 and moved him to within striking distance of Jonah Lomu’s all-time record of 15.

But there was no doubt Pietersen’s opener laid the foundation for the success.

“It is always special scoring a try for your country, but a hat-trick is very special and I’ll remember it for ever,” said the wing.

“We had to win, if we didn’t win today it we would have been in a very difficult situation to qualify for the quarter-finals.

“We were open about it all week, on the situation that we were in, and the only way to get out of the situation was ourselves. We told ourselves that if we win our remaining three games then we will definitely qualify.”

This result does not have a huge impact on Samoa’s hopes of qualifying, however, with Japan and Scotland still likely to be their key fixtures.

Stephen Betham’s side showed signs of promise in the opening stages. And they were on the front foot before Pietersen’s interception try punctured any growing momentum.

“That intercept in the first half cost us for the whole game,” said their captain, Ofisa Treviranus.

“If that intercept hadn’t gone, the game was really tough, and we would have had a really tight game. After that intercept, some of the boys were heads down.”

Samoa’s heads were down but they do not consider themselves out of contention in Pool B.

Coach Betham said: “At the moment I think our pool is still wide pen. It’s anyone’s game. We lost today but we still have a chance.”